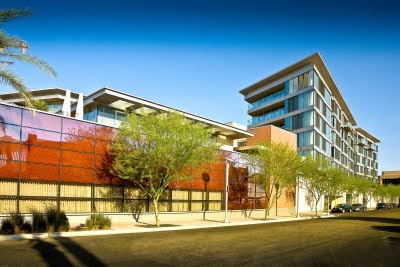 This is a personal shot and an unusual one for me because I usuually don't work in urban surroundings.

It was taken during a break on a resort shoot in Scottsdale, AZ. I decided to go downtown and explore the air-conditioned cocoons called shopping malls. Sitting at a traffic light, I saw the newly opened W Hotel out of the corner of my eye, on the cross street. I zipped over and parked on a side street and watched the scores of twentysomethings come and go from the W. They all seemed to be dressed in baggy surfer shorts and garish T shirts, proclaiming "Acapulco Beer Champ", and the like.

Starwood like to brand the W as a hip brand but I doubt that this is what they had in mind. Must be happy hour, I thought, as the music blared from the rooftop pool deck and I could see the silhouettes of their bodies milling around against the setting sun.

I quickly and somewhat absent mindedly shot off about a dozen frames and didn't bother to go inside because it looked like a zoo. Besides, I was on a mission and going shopping before we started to set-up for the evening's shoot.

Later that night, I started to process the day's take and when this shot popped up on the screen I became dissapointed that I hadn't spent more time or given it more thought. I liked it and wished that I had more to choose from.

All that I can say is that I blame it on the heat. It was 115 degrees for seven days in a row and even the usual cool night air of the desert didn't materialize. The first day, I just thought that the heat was a little crispy. The second day, I started muttering, "son of a bitch", but by the third day, I was going mental. Even the cameras and lens barrels were hot to the touch and when a gust of super-heated wind hit my face, it just sucked the breath from my mouth.

I've worked in the desert before; here in Scottsdale, as well as Las Vegas and in Cabo San Lucas, Baja, a number of times, but I have never been as debilitated as this. My usual stomping ground is the Caribbean and Mexico and I rarely work north of Miami. Not only do I have no problem with the heat, I love tropical weather and feel that I was born for it. All I can say is that it's a good job I've been doing the Cancun shuttle lately and my skin is already well tanned, because I would have fried otherwise.

The day after I left, Phoenix and Scottsdale were hit by a massive sandstorm, hundreds of feet high, driven by searingly hot winds, that pummeled the city and brought it to a standstill. Whew. Close one.
Posted by Andrew Ptak Photography at 4:45 PM No comments: