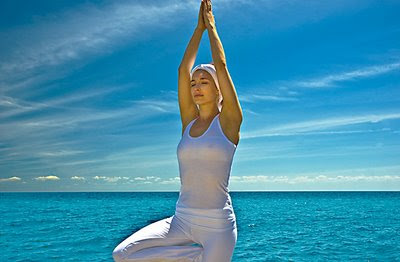 This is Alayna, a Yoga instructor and part-time model. For this resort shoot she was both.

This shoot had to be one of the funniest of my life, and hers. We were on a pier that jutted out into the water - kept the sand from the gear and all of that - and suddenly Alayna blurted out, "They're having sex!"

More than a little puzzled, I gave her a goofy look and she pointed to the beach behind me as her eyes opened wider and wider.

Sure enough. There's a middle aged couple going at it in full view of everyone on the beach. They made absolutely no attempt to hide what they were doing, as a matter of fact, I think they were showing off. A man came over to us and said, "do you see that?" I said that I was trying not to because I was trying to work, but my model couldn't get the surprised look off her face!

They were very, very quick. The guy zipped up, the woman pulled the hem of her dress down and they just walked away without a care in the world. When Alayna and I had finished she helped me schlepp the gear back to my room and guess who we saw on the way? "He's paying her for chrissakes", I said. Sure enough, an over- the- hill working girl and her old fart John. Wonder if management knew about this, I thought?

Weird shoot. Turned out well though considering the distraction and all.
Posted by Andrew Ptak Photography at 2:56 PM No comments: