Well, not quite, but it feels that way sometimes. 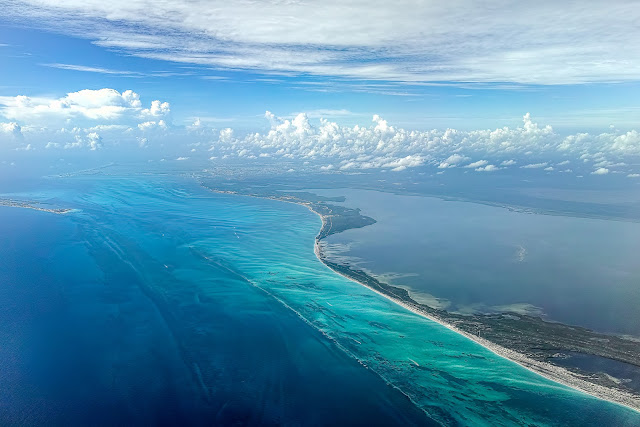 The sands of Playa Cancun ahead and the city and main hotel zone in the distance.

This is my sixth time this year and I have no idea how many times it's been over the years. Never tire of it though. I used to live here many, many years ago and it still feels like home, even now.
Posted by Andrew Ptak Photography at 3:24 PM No comments: 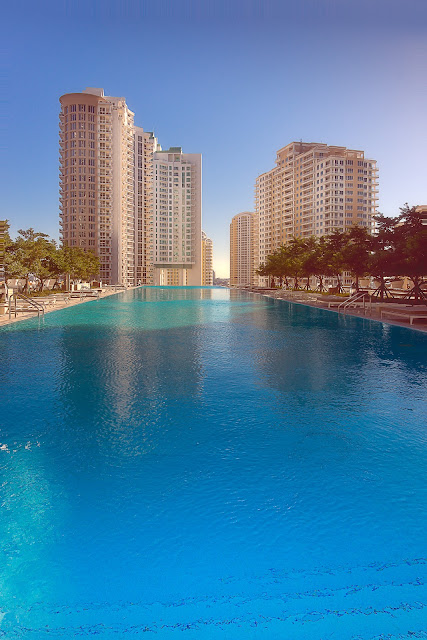 Posted by Andrew Ptak Photography at 5:34 PM No comments: 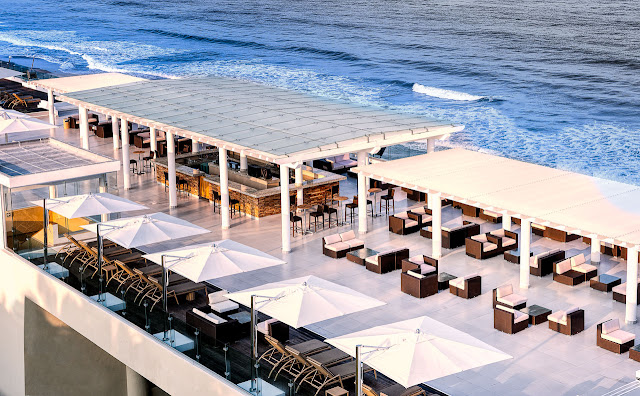 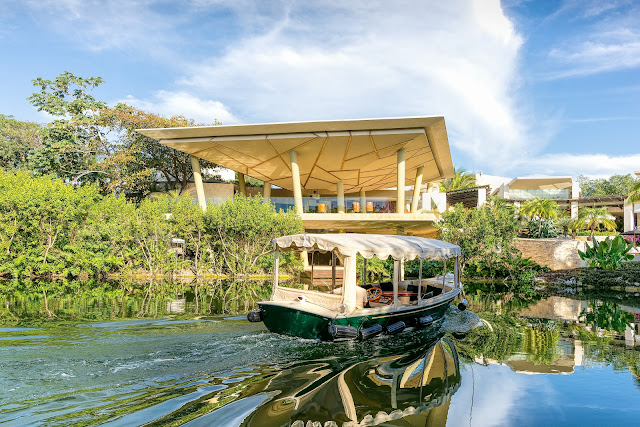 Forty minutes south of Cancun and ten minutes north of Playa Del Carmen, Mayakoba is several hundred acres of jungle, mangrove swamps, man made canals, a golf course and three (soon to be four) gorgeous resorts. A gorgeous beach with turquoise waters tops it off.

Fairmont was the first and was soon followed by Rosewood (pictured above) and then Banyan tree. Hyatt Andaz is scheduled to open by the end of 2016.

This was my third time in nine years and it's as good as the first day I laid eyes on it. Owned by Spanish developer OHL, who have sensitively developed the land, with the addition of the canals and little streams, all of which are man made, they have created a nature preserve among the wetlands of the mangroves. Myriads of birds - you should see the size of the Great Blue Heron - deer, coati, raccoons, crocodiles, iguanas and mammals of all kinds are to be seen throughout the day.

The larger canals connect the three resorts, while the numerous streams are within each resort and allow one to watch the cormorants dive for fish while sitting on your patio or terrace. It's a great way to have morning coffee and watch the sun slowly rise over the trees.

Electric powered boats, like the one above, ply visitors to and fro and many of the casitas have their own private dock for water taxi service if you prefer it to the golf cart shuttle service available at all of the resorts.

Highly recommended and don't forget to bring a camera! 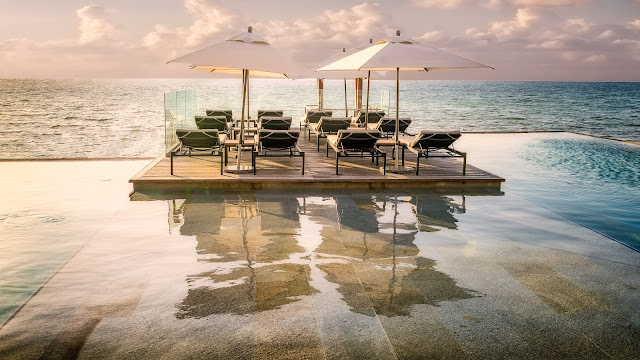 The recently opened Grand Hyatt is right in the middle of the bustle on 5th Avenue, the main shopping, dining and place to be seen street in Playa.

It's also a block long and stretches out to the beach. Distinctive, modern architecture set it apart and certainly raise the bar in the area known for its local boutiques, cafes and shops. From cheap T shirt shops to Cartier and Mont Blanc, they're all there on Avenida Cinco.

I work in the Riviera Maya and around Playa about three or four times a year and have developed a taste for Playa, which I first of all quite disliked. Resorts on the Riviera Maya are relaxing and tranquil while Playa is busy, very busy. Traffic is a hodgepodge of everything imaginable and no one seems to know what a stop sign is. Parking is almost impossible - unless you know of my secret spot. It took a long time to find so I'm not telling.

Aside from that, it's full of real characters, both tourist and local and there's never a dull moment.

Thanks to Braulio and the rest of the folks at Hyatt who made it a pleasure. The above is sunrise at the infinity pool, overlooking the ocean.
Posted by Andrew Ptak Photography at 4:41 PM

Cancun, Riviera Maya. Riviera Maya, Cancun. What can I say? It's a very busy place. Tourist arrivals and new resort building keep going up and up.

This was brand new - Excellence in Playa Mujeres, north of Cancun and the hotel zone, directly facing it's namesake, Isla Mujeres.

Before all of this development started, I was in Isla Mujeres. No ferries in those days, just fishermen who would take you over for a few pesos. There was only one hotel and a lot of smuggling of electronics it seemed. Late at night I watched fishing boats swinging their booms and big nets over the dock to unload the day's catch . . . . . . large boxes labeled Toshiba, Sony, Panasonic etc. The Honda motorcycles weren't in boxes! 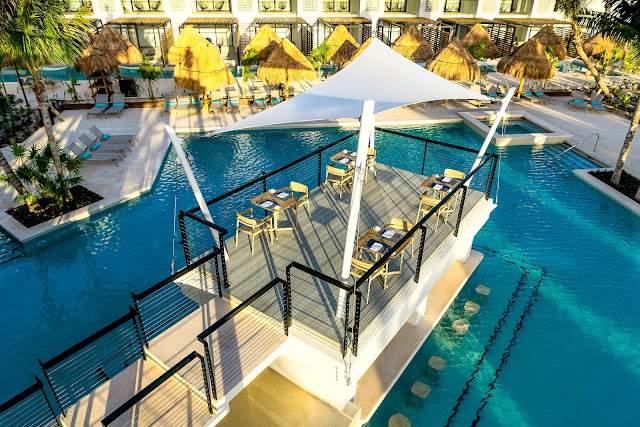 I switched to Sony many years ago because of their lovely Zeiss lenses, but this was the first time I had used an E mount mirrorless for a job. While they produce lovely files, I miss a bright, optical viewfinder. Electronic viewfinders just aren't up to snuff. Especially for work in bright sun and this old man's eyes. Having to hold a camera away from my body in order to see anything just has the wrong feeling about it.
Posted by Andrew Ptak Photography at 2:28 PM

I decided to add a few entries in order to catch up - while I'm in the mood and have the time.

Just north of Playa Del Carmen and next to Mayakoba is Blue Diamond, formerly the Mandarin Oriental, the last time I was there in 2008.

Lush and dense landscaping contrast the smooth and sparse exteriors of the Casitas dotted around the grounds. Mine had a stream behind and I watched from my patio as the Cormorants fished for food every day. 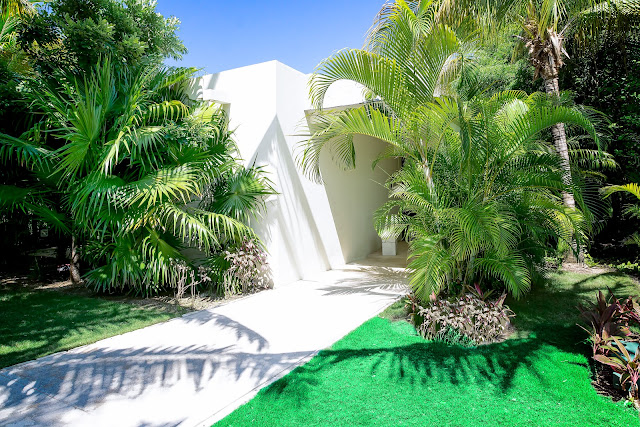